skip to main | skip to sidebar

Mystic Pizza & Beyond: Seafarer's Trail: The Mystic Seafarer's Trail--E-book coming soon!: I am currently working on an e-book about the secrets behind the haunts and homes of Mystic's famous sea voyagers. I like to write what inte...
Posted by Lisa Saunders at 1:06 PM No comments:

My hound Bailey and I just trekked eight miles round trip to “The Hanging Garden of Enders Island” on my qu..."

Posted by Lisa Saunders at 5:08 AM No comments:

How to Get Thin and Famous Walking the Mystic Seafarer's Trail 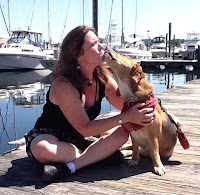 Face it—famous people have an easier time getting work, published or promoting their cause. If you’re thin on top of it, then you can live longer to enjoy it!
After 50 years of dieting (I was a fat kid too), I have to concede that my old classmate was right when she answered my question at a high school reunion on how she stayed so thin: “You can’t eat anything and you have to exercise all of the time.”

And the secret to becoming famous? Now that truly is a secret! Not being athletic or otherwise talented, I have often resorted to the antics of Lucy Ricardo when trying to sneak into Ricky’s nightclub act. In one "I Love Lucy" episode, however, she got Ricky to agree to feature her if she could squeeze into the small costume of a performer who had quit. Lucy starved, exercised and steamed herself down to that size. Could that be the answer for me?

To find out, I’m about to launch my latest strategy for getting thin and famous—but it will be a lot more fun than Lucy's weight loss regimen! I will walk and write about the Mystic Seafarers Trail—a path I designed to include “The 7 Wonders of Mystic.” It will begin where Amelia Earhart got married in Noank, go past Mystic Pizza to the haunts and homes of famous sea captains and their vessels, including the oldest whaleship in the world--one that saw stowaways, amputations, floggings, burials at sea, and is featured in several movies. The trail crosses the drawbridge in downtown Mystic and goes to the Mystic Aquarium & Institute for Exploration, where the discoverer of the grave of the R.M.S. Titanic keeps his home office, and to Olde Mistick Village, where Gloria, the cranky, arthritic goose has been reigning over the duck pond for decades. The trail moves south to what I call “The Hanging Gardens of Enders Island” located at the St. Edmund’s Retreat Center, where relics such as the withered arm of Saint Edmund, who preached for the Sixth Crusade, are displayed. Then eastward to Stonington, where the discoverer of the Antarctic lived and where vastly out-gunned citizens fought off an attack by the British in the War of 1812.

I will not walk this 10-mile trail all in one day. This trip will involve daily treks back and forth from my home or car. My sidekick in this venture will be my faithful walking companion, my beagle/basset hound, Bailey— a true publicity hound who is already famous. He’s been featured in print and online newspapers, and in a commercial (he is the handsome dog to your left).

When I’m done covering my initial planned route, if I’m still not as thin and famous as my hound, I’ll lengthen the Seafarer’s Trail further west to the hidden tunnel at Fort Griswold in Groton, where traitor Benedict Arnold led British forces to victory during the burning of New London, and further east to include a beer tasting at the Cottrell Brewing Co. in Pawcatuck. Perhaps I will also walk north to the wineries buried in the countryside.

Why do I have all of this time to leisurely journey through Mystic Country? When Jim was transferred here last year from New York, I left a job that I loved in campus communication at a college and began working as a freelance publicist and writer, giving me ample, perhaps too ample, time to walk my hound down several side streets to delve into the back stories of the area. Seeing how much fun I’m having, many have asked me, “When are you going to get a real job?”

Good question—so I have set a deadline. If I’m not thin and famous by September, enough to be cast as an extra in the next major motion picture due to be filmed here (starring Meryl Streep, Tommy Lee Jones and Steve Carell), then I will focus my energies into getting a "real" job—and leave the uncovering of Mystic’s secrets to someone else!


If you have tips on how to get thin and famous, or want to see a particular point of interest covered on my trail, please share them in "Comments" below. To read earlier attempts, some successful, at getting thin and famous (well, at least published), read earlier posts on my blog, “How to Get Thin and Famous” at: http://howtogetthinandfamous.blogspot.com/
Posted by Lisa Saunders at 5:55 AM No comments:

Are mundane chores preventing you from reaching your true potential--like becoming thin and famous? Over the years, I have found several ways to make routine tasks easier—especially for a lazy, always-on-a-diet person like me. If you're lazy too (or busy saving the world or raising children) and need some advice, or have a tip to share, please read on:

Laziest way: Buy fake potted plants and put them outside. That's usually what I do--I’m not kidding! It mortifies my mother who is a true gardener, but for drive-by's, I doubt they can tell the difference (one winter, however, I was too lazy to put my red begonias inside so they me gave away as they sat there getting faded yet still blooming in the snow).

Lazies who want to make an effort: Buy plants from a friend’s plant sale fundraiser and hire your friend’s kid to plant them (at least you're maintaining friendships when you do that). Warning: you’ll have to pray for rain all summer long or you’ll be out there watering them every few days.

Laziest way: Just give up. I saw a movie recently where the leading lady said, “I can’t have girlfriends, because then I'll have to remember their birthdays.” (By the way, if your friend is a true friend, she would just self-address a card and give it to you a week before her birthday.)

Lazies who want to make an effort: If you’re too lazy to enter your friends’ birthdays on a google calendar that can be set to remind you, then you’ll have to be thoughtful other times of year. For example, if your friend produces a CD, buy it, or if they approach you with a catalog from their child’s school fundraiser, buy something. If you don’t need it, give it away as a gift. If you can’t afford to buy anything, promise them that when you have to do a fundraiser, you won’t bother them!

Laziest way: Hire a housekeeper who doesn't speak your language (so they can't blab to all your friends about what a slob you are).

Lazies who want to make an effort: Get rid of all knickknacks—be honest, you never dust them and they cover your table surfaces that you need for piling papers on. When people ask you what you want for birthdays, Mother’s Day, etc., ask them to clean your house for a couple of hours or to hire someone to clean it. That way you get what you really want and you are making it known to everyone that you just can’t handle doodads in your house.

Laziest way: dine at a drive-thru.

Lazies who want to make an effort: it’s all about the crockpot and pre-washed salad, canned/frozen vegetables and prepackaged soup mixes. Never fall for those crockpot recipes that make you sauté or brown something first—we’re trying to save steps here. I am getting my “weight loss” crockpot recipes from a free weight loss site I joined (they give you a diet and track your weight—if you’re honest when plugging it in) at: http://www.sparkpeople.com/

Sorry, there’s no getting out of going to the grocery store. But if you’re buying a lot of frozen and pre-packaged, chemical laden foods like I suggested, you probably only have to do major grocery shopping once a month since that kind of food lasts forever!

Laziest way: Just say “No!” (But you better be in mourning or sick or something--otherwise, your friends WILL be offended unless you all agree beforehand not to exchange greetings.)

Lazies who want to make an effort: If you’re bad about remembering birthdays, then you really have no choice—you must send holiday greetings. Other than sending a form letter or a family/pet picture postcard, the easiest thing to do is to send an e-mail with the excuse that you are saving trees or on the cost of postage in order to donate to some noble cause. Right after 9/11, I used the anthrax scare as my excuse!

Readers: Please post your advice in comments--thanks!
Posted by Lisa Saunders at 5:41 AM No comments:

How To Have a Party

Mystic Pizza & Beyond: Seafarer's Trail: How To Have a Party in Mystic: " Jim and I just hosted our first Memorial Day Weekend party since moving to Mystic from New York last summer. None of our new ..."
Posted by Lisa Saunders at 4:39 AM No comments:

How to Boat "Mystic Style"

Mystic Pizza & Beyond: Seafarer's Trail: How to Boat "Mystic Style": "by Lisa Saunders I have never been accused of having style. But I do know how to get on a boat—especially since moving to Mystic. But I..."
Posted by Lisa Saunders at 4:39 AM No comments:

How to Get Cast in a Mystic Film

Mystic Pizza & Beyond: Seafarer's Trail: How to Get Cast in a Mystic Film: "Didn't get a part as an extra in the movie, Mystic Pizza , staring Julia Roberts? Weren’t asked to be a zombie in the recent movie filmed at..."
Posted by Lisa Saunders at 4:39 AM No comments:

This can be you!

Illustration from my novel, RIDE A HORSE, NOT AN ELEVATOR

Want occasional news from me?